Fatty liver haemorrhagic syndrome (FLHS) is a syndrome found mainly in laying hens. It is characterized by a sudden mortality, a decrease in egg production and large amounts of fat in the liver found during necropsy. In this article we want to share an overview of the main information including some recently published information about FLHS from the University of Queensland.

FLHS is a multifactorial syndrome for which several risk factors have been described:

A surplus of energy intake

A surplus of energy intake seems to be the most important factor. Some authors conclude that the source of energy is irrelevant, but others conclude that diets high in carbohydrates are more likely to cause FLHS than high fat diets. It is hypothesized that feeding birds diets high in carbohydrates and low in fat results in a high de novo fatty acid synthesis in the liver. During the novo fat synthesis, fatty acids are formed from carbohydrates. These fatty acids can subsequently be converted into triglycerides or other lipids. The de novo fat synthesis puts much pressure on the liver fat metabolism. Diets with a higher fat concentration reduce the need for de novo fatty acid synthesis. FLHS is seen more in obese chicken than in chickens with a normal or low bodyweight. It is not known if this can be explained by the surplus of energy intake, or that it has a direct influence.

Hot temperatures are a well-known risk factor; FLHS is more prevalent during summer months. Exposure to extreme cold can also be a risk factor relevant for backyard chicken.
The explanation for the increased incidence after exposure to heat or cold stress is not completely clear. It has been shown in fowls that heat stress can influence the lipid metabolism. Other hypothesise are a reduce in energy requirement when environmental temperatures increase or a decrease in animal movement, which is also described as predisposing factor in caged hens.

High producing laying hens are mainly affected during peak production, which can be explained by the role of oestradiol (oestrogen); hens with FLHS have a higher plasma oestradiol concentration than non-affected hens. Oestradiol administration has also been used to induce FLHS in laying hens, which was most successful in hens that were also given ad libitum feed.
Oestradiol stimulates the fat storage in the liver, to provide for the fat needed for yolk production.

The amount of phospholipids in the liver is also considered important for the development of FLHS; the phospholipid concentration is lower in chicken with FLHS than in healthy chickens. Phospholipids have a lipotropic action and are thus important for the mobilization of fat from the liver. Besides, they are present in the cell membrane where they regulate the integrity and porosity of the membranes, protecting cells.

Shini and his study group found that the inflammatory response is a contributor to the pathogenesis of FLHS in chickens already experiencing fat infiltration in the liver (steatosis). His study group found a higher concentration of fibrinogen and leucocytes (heterophils and lymphocytes) in chickens which suffered from FLHS than in control groups. Also the mRNA expression of IL-1β and IL-6 was higher. These cytokines are known to be involved in the activation and promotion of leucocyte infiltrations at sites of injury. Inflammation was found to be local (hepatic) and systemic.
In these animals, FLHS was induced by oestrogen and LPS (lipopolysaccharide). LPS is a component of the outer membrane of gram negative bacteria, which were used induce an immune response.
In the study it appeared that LPS were the reason for transition of a simple steatosis to FLHS. In commercial conditions the inflammatory reaction causing this transition can be caused by other factors, including nutritional and environmental factors. To our knowledge, there are not yet any researchers which studied the effect of anti-inflammatory veterinary medicinal products on FLHS.

FLHS has a higher incidence in hens in (enriched) cages, due to the limited movement of hens.

Mycotoxins have also been thought to be related to FLHS, but this is considered questionable. At least for aflatoxin it is known that they cause other hepatic lesions. 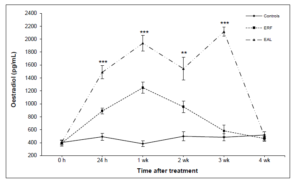 Even though problems are often encountered during the production peak, the onset of FLHS started already at an earlier stage. The first changes in the liver can already be observed at the onset of the reproductive period, and are related to the increase in synthesis of lipids and proteins destined for the egg yolk. However, no clinical signs are detected at this stage. The most profound changes occur at or after the peak of lay most probably induced by oestrogen persistence throughout the laying period.

Why are birds so susceptible to this condition? This can be explained by marked differences between birds and mammals.

FLHS is not only important for commercial hens. It is also an important cause of non-infectious mortality in backyard chicken. Especially nutritionally over-conditioned hens are at risk for developing FLHS, particularly in the spring and summer months. The increase in production of eggs in the spring in combination with the high temperatures seem to the cause.

Flocks with FLHS problems are often characterized by a sudden increase in mortality despite good laying percentages. The mortality is seen mainly in hens which are in full production. The mortality is usually 3-5%, but higher mortality rates have been reported. Birds that are found dead can be pale, but usually did not show any other clinical symptoms.
In some cases, the mortality can be accompanied by a (sudden) decrease in egg production.
In live animals it is very difficult to distinguish affected from healthy hens, although some hens do develop pale combs.

Necropsy on the birds found dead often reveals abdomens filled with large blood cloths, arising from the liver. Several abnormalities can be found in the liver, including:

Large amounts of fat are not only found in the liver, but also in the abdominal cavity around the viscera. The ovaries are often active, at least in the early stages of FLHS. When the syndrome persists, inactive ovaries can also be found.

Recovery of the liver parenchyma will result in fibrosis. This can also be observed in hens that have recovered from FLHS. Due to the fibrosis after recovery of the disease, clinical symptoms can also occur during repeated mild episodes of FLHS and build-up of fibrotic tissue in the liver.

How do the excessive amounts of fat in the liver result in sudden haemorrhage? It has been proposed that excessive fat may disrupt the architecture of the liver and result in weakening of the reticular framework and blood vessels. Another proposed mechanism is focal necrosis of hepatocytes leading to vascular injury. Excessive lipid peroxidation of unsaturated fatty acids in the liver may overwhelm the cell repair mechanisms and result in tissue damage.

Besides the clinical symptoms and pathology, there is little one can do to diagnose this disease. There are unfortunately no diagnostic tests available.
Because of the difficulty of recognizing FLSH and the absence of diagnostic tests, the syndrome is often overlooked.

As explained in the first paragraph, FLHS is a multifactorial syndrome. The key part of prevention depends on prevention of the above mentioned risk factors.

Phospholipids are structural lipids, they are structural elements of cells. Lecithin is the major phospholipid and is an integral part of the structure of lipoproteins and the microsomal membranes to join them and therefore plays an essential role in the formation of very low density lipoproteins (VLDLs) and thus for the transport of fat from the liver to other tissues. Lecithin deficiency is associated with an accumulation of fat in the liver and a decrease in the quantity of fat deposited in the egg yolk.

Choline supplementation in laying hens is associated with elevated serum VLDL levels and a reduction of cardiac, hepatic and abdominal fat. The combination of these functions result in the prevention of abnormal accumulation of fat in the hepatocytes, the so called “fatty liver”.

The requirement of choline increases with high-fat diets. The supplementation of choline can also be particularly interesting during periods of heat stress, since the deposition of fat in the liver increases significantly at higher temperatures.

Due to the severity of this syndrome, it is vital to act quickly. Complementary feeds which provide for example choline, are therefore preferentially given via the drinking water.

Dopharma has a complementary feeds with choline in combination with betaine, methionine, lysine, sorbitol and plant extracts. This liquid product Heparenol is very suitable for use in drinking water in poultry.