Dairy farms that put their cows out to pasture or feed them fresh grass may be affected by liver fluke sooner or later. Liver fluke is gaining ground in Western Europe. More infections are being reported in the Netherlands and Belgium, too. Death caused by liver fluke is almost unheard of in cattle. Does that make this disease less important?

Liver fluke infection or distomatosis is a parasitic disease in ruminants that is caused by trematodes or flatworms. The large liver fluke that is found in our neck of the woods is called Fasciola hepatica. This disease causes significant economic losses worldwide. The losses are attributed mainly to reduced milk production, weight loss and rejected livers in the abattoir. In addition, a liver fluke infection can amplify or reduce the effect of other pathogens or interfere with their diagnosis (see further in this text). What people also tend to forget is that this parasite can cause problems in other grazers and also in humans.

Liver fluke infections used to occur only in countries further to the south, but in recent years we have seen increasing numbers of liver fluke infestations in our countries too. Changing climatological conditions (milder winters, high temperatures and more precipitation) have created better conditions for the development of the liver fluke. In addition, the changing weather conditions also mean that the period in which infection with liver fluke can occur starts earlier on in the pasture season. There are also other risk factors that facilitate the spread of liver fluke at a dairy farm. A study performed in Denmark revealed that heifers and non-lactating cows that graze in wet pastures form significant risk factors for persistence of a liver fluke infection at a dairy farm. Other factors include the purchasing of infected cows, no or poor treatment of infected young cattle and a lack of control over or occurrence of resistance. For example, resistance to triclabendazole can result in a steady spread of liver fluke infections.

The liver fluke has an indirect cycle, in which the pond snail Galba truncatula plays an important role as intermediate host. The presence of this pond snail is vital to completing the life cycle of the liver fluke.

The adult liver fluke lays eggs in the liver, which are excreted together with the bile in cattle dung. An adult liver fluke can produce 4,000 to 7,000 eggs per day. Once excreted, ciliated larvae or miracidium larvae emerge from the eggs. These miracidia need to find a pond snail within 24 hours in order to survive. Once inside the snail, the larvae develop into cercariae. These larvae then leave the snail and this is how they reach the pastures. Once the tail is lost, the larva encapsulates to form a contagious cyst (metacercaria). Grazers can become infected when they eat these cysts via the grass. Juvenile liver flukes develop in the small intestine within hours of ingestion. These flukes drill their way through the intestinal wall and migrate through the abdominal cavity towards the liver and bile ducts.

In cattle, the life span of a liver fluke varies from 6 months to two years.

The migration of the parasite in the liver and the damage caused there can cause a whole range of symptoms. These can vary from reduced milk production, weight loss, reduced fertility and diarrhoea, to death. 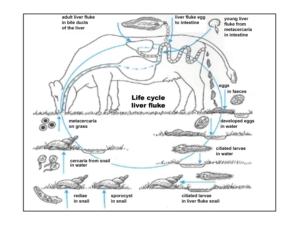 An infection in cattle is often sub-clinical and therefore latent, resulting in economic consequences. In sheep the infection can result in sudden death, particularly in young animals.

The liver fluke diagnosis can be made in various ways. Not every method is relevant at every stage of the infection.

A dung inspection (sedimentation-flotation) can reveal the number of eggs excreted by adult worms. The dung (rectal sample) is examined under a microscope for the presence of liver fluke eggs. The presence of eggs from the parasite is inconclusive and cannot be performed at every stage. For example, during the prepatent period, the immature stages do not excrete eggs. Furthermore, the number of eggs found in the faeces does not always correlate to the number of adult parasites in the liver. After ingestion of a metacercaria, it takes on average 10 to 12 weeks for the liver fluke to mature and start excreting eggs. The best period for a dung inspection is 3 months after the end of the pasture season. Due to intermittent excretion, it is obviously best to sample several animals from a group. The detection of liver fluke eggs in the dung provides information about the infestation in the group.

Detecting antibodies in the blood

Detecting antibodies in the milk

Tank milk testing can be used to determine the Optical Density Ratio (ODR) of antibodies targeted against Fasciola hepatica. This tank milk testing can be performed throughout the year, but should preferably be performed before the end of the pasture season. This gives the dairy farmer an idea of the extent of infection at a farm-wide level. An ODR < 0.30 is considered negative. An ODR between 0.30 and 0.50 points to a liver fluke infestation without severe production losses. An ODR > 0.50 points to a severe infestation of liver fluke with potentially negative effects on milk production and fertility.

Detecting antigens in the dung

An ELISA test to detect antigens in the dung (high sensitivity) can be used to check how severely an animal is infected.

Animals that have died can also be examined to check how badly the liver is damaged.

The immune response as a reaction to the presence of pathogens can be divided into a non-specific immune response and an acquired immune response. As the term suggests, the non-specific immune response is not specific to a certain pathogen and therefore does not result in an immunological memory. In the acquired or adaptive immune response, the B-cells that can differentiate into antibody-secreting plasma cells and the T-cells that can differentiate into CD8+ cytotoxic T-cells, CD4+ helper T-cells and regulatory T-cells are important. A lot is known about the T-helper cells type 1 (Th1 cell) and type 2 (Th2 cell). The Th1 cell primarily produces IFN-γ and is important for the activation of macrophages, for the removal of intracellular pathogens and for cellular immunity. The Th2 cell primarily produces IL-4 and is important for the activation and recruitment of inflammatory cells and for humoral immunity.

Infections of Fasciola hepatica are associated with the release of high concentrations of Interleukin 4 (IL-4), IL-5 and IL-13, which ultimately results in elevated concentrations of IgE, eosinophilia and other immune responses associated with the Th2 subtype. The early differentiation between the Th1 and Th2 cell lines of the helper T-cells is facilitated by cytokines such as IL-4 and IFN-γ. The high concentration of IL-4 after liver fluke infection and the subsequent strong Th2 immune response also results in a down-regulated initial Th1 immune response with reduced IFN-γ production and reduced reactivity of the lymphocytes.

A schematic representation of the immune response regulation induced against Fasciola hepatica is provided below.

Worms have developed various mechanisms to escape the host’s immune response. Maizels et al. referred to them as “The masters of immunomodulation”.

These immunomodulatory properties ensure that the worms can survive in the host and can cause interactions with inflammatory and immune mechanisms that are involved in other infections, vaccinations, allergic reactions or auto-immune diseases.

Bovine tuberculosis (BTB) in cows caused by Mycobacterium bovis is still a major disease worldwide. The eradication programmes in most countries are based on:

As mentioned above, a liver fluke infection suppresses the Th1 immune response and therefore the cellular immunity. This may reduce the sensitivity of the two screening tests used in the field, resulting in false negative results.

This possible link was demonstrated by Robin J. Flynn of Dublin University.

In order to study possible interference, he vaccinated animals with and without liver fluke infection with the BCG vaccine (avirulent strain used in human medicine).

The SCITT and IFN-y test performed in the various groups of animals produced the following results:

The experiment described above revealed that in cattle infected with liver fluke interference can occur in the existing screening tests for BTB used in the field.

The liver fluke with its immunomodulatory properties can increase the host’s susceptibility to infections by other pathogens. This is because the down-regulatory effect of IL-4 on the Th1 immune response (which is related to cellular immunity) can cause certain infections in which this type of immunity is important to be more severe.

Studies performed in the late 1970s and early 1980s found that co-infection of cattle with Salmonella dublin and Fasciola hepatica resulted in increased severity of the clinical disease, a longer period of illness and an increased risk of co-infected animals becoming carriers of S. dublin. The pro-inflammatory response to Salmonella infection suppressed by F. hepatica ensures that the sensitivity to this intracellular parasite increases.

Escherichia coli O157 is a bacterium that is responsible for haemorrhagic diarrhoea in humans. Cattle are reservoirs for these verocytotoxigenic E. coli and therefore form a potential danger of transmission to humans. A study performed by the University of Liverpool revealed that cattle infected with Fasciola hepatica had an increased risk of excretion of E. coli O157. Proper management of distomatosis can prevent potential infection with E. coli O157.

Combating the liver fluke is a two-pronged approach.

Various flukicides are available on the Dutch market. Not all products are effective against every stage of the liver fluke. Triclabendazole, which is effective against all stages of the liver fluke, was for many years the product of choice in combating an infection. The problem is that the liver fluke is increasingly becoming resistant to this product. In addition, triclabendazole cannot be used for milk-producing cattle. Products containing oxyclozanide can be used in dairy cattle during lactation and the entire non-lactating period and are effective against adult liver flukes. Dopharma recently introduced Distocur 34 mg/mL, containing the active ingredient oxyclozanide, to its product range. Therefore, the treatment of a liver fluke infection or distomatosis in dairy cattle can now also be treated in the Netherlands without implementation of the cascade.