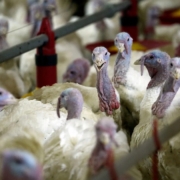 For most Americans, Thanksgiving would not feel complete without a roast turkey on the dinner table. Legend has it that turkey was served at the First Thanksgiving in Plymouth Colony in 1621, and the Thanksgiving tradition of presenting turkeys to the U.S. president dates back to 1947. Eating turkey is considered an American tradition, but how turkeys become food is much less glamorous.

Turkeys available at supermarkets today are the result of intensive farming. Selective breeding and commercial farming techniques have altered the appearance and damaged the general quality of life for turkeys. Commercial turkeys have little in common with the wild turkeys of 1621 or even the domesticated turkeys of 1947. Today, millions of turkeys around the globe are bred, killed, and eaten every year.

What Is Turkey Farming?

The world’s top turkey producing country is the United States, followed by Brazil, Germany, France, and Italy. In the U.S., four states—Arkansas, Minnesota, Virginia, and Indiana—accounted for more than half of all turkeys slaughtered in 2019. The turkey industry itself is incredibly lucrative. The value of all turkeys produced in the U.S. during 2019 was $4.30 billion, and most turkeys were produced using intensive farming techniques. Only 3 percent of turkey meat revenue—$139 million—was generated by farms certified as organic.